Polestar trading holds up in the weeks since its SPAC listing; here’s how the electric vehicle maker stacks up against others

Swedish electric vehicle developer Polestar Automotive (PSNY) began trading on the Nasdaq on June 24 after completing one of the largest-ever SPAC mergers, a deal that valued the company at $20 billion. Including the PIPE, Polestar received about $890 million from the transaction, making it the year’s largest de-SPAC by money raised, with a relatively low share redemption rate of about 20%.

In the two weeks since its official listing, Polestar has experienced volatile trading on the Nasdaq, reaching a high of $13.00 on its first day before tumbling to $8.81 over the next week; it has since stabilized to $9.95. That is relatively successful compared to the dramatic drops from other 2022 de-SPACs, which average a -50% decline from the transaction price. It’s worth noting that existing Polestar shareholders are subject to a lock-up agreement.

Polestar’s Business
Polestar got its start in 1996 as a racing team which used modified Volvos in competitions, and later branched out into selling various performance hardware and software for Volvo cars.  In 2015, Volvo, under the ownership of Chinese auto manufacturer Geely, purchased Polestar, and focused the division on producing high-performance EVs. Volvo considered taking Polestar public on the Frankfurt Stock Exchange in 2019, but ultimately began talks with SPAC Gores Guggenheim, and the two companies announced a merger agreement in September 2021.

Polestar highlights both its Swedish heritage and its global market presence, noting that it and Tesla are the only two global pure play premium EV makers in mass production. After a limited run of its initial Polestar 1 hybrid, the company launched its first mass-produced BEV, the Polestar 2, in 2020. It delivered 29,000 Polestar 2’s in 2021, and expects to ship another 50,000 this year. In April it announced that Hertz would purchase 65,000 EVs over five years. The Polestar 3, an SUV, is set to enter production in early 2023, and will be manufactured in both the US and China, while the SUV coupe Polestar 4 and GT sedan Polestar 5 are slated for later in 2023 and 2024, respectively.

To read the rest of the article, sign up for a free trial of IPO Pro. 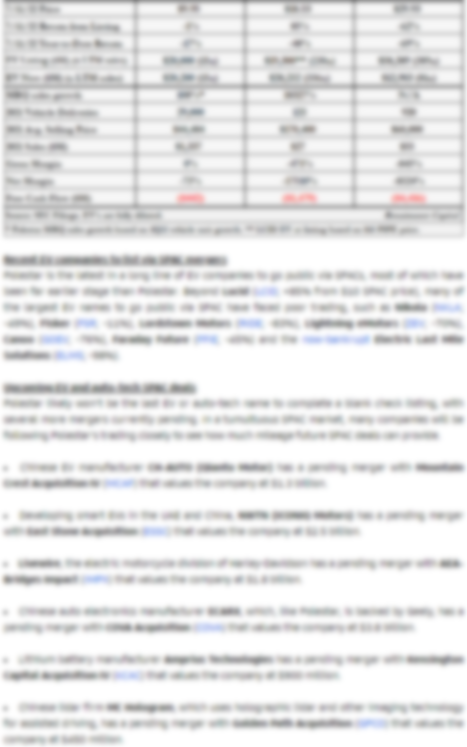