How the IPO Market went from Dot.com to Unicorn Bubble

The Hijacking of the IPO Market Part 4

Twenty years after the dot.com bubble of overpriced publicly-traded companies abruptly imploded in 2000, a new group of overvalued companies is rapidly deflating: the privately-owned $1 billion plus unicorns. The public equity market is reaching new highs, while the private market is imploding.

Understanding how the unicorn bubble occurred is key to limiting its negative effects to the US economy and shareholders in these companies. Today’s bubble was enabled by a single provision in the JOBS Act of 2012 that increased the number of shareholders legally permitted to a private company to 2,000 from 500. This allowed private companies to stay private longer and in many cases, reach significant size.

As a result, the number of private companies grew from under 25 in 2012 to over 200 today in the US alone. Including Asia, there are an estimated 400 unicorns worldwide today. 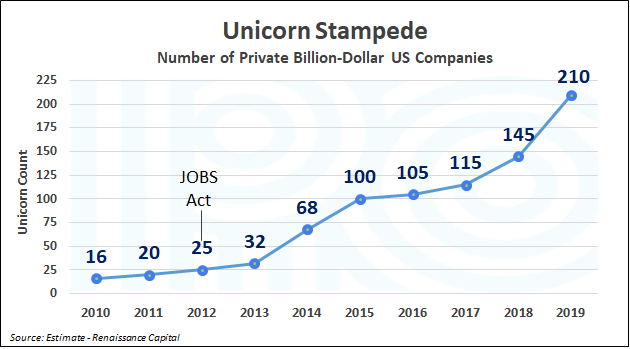 By staying private longer, the venture capital firms could invest in multiple rounds of financing at increasingly higher valuations, allowing them to book paper profits in their portfolios and report outstanding results to their investors. The problem is that the valuations are artificial.

The SEC established the 500 shareholder limit to protect investors and employees. At some point a private company reaches the stage when it becomes large enough to have material impact on its employees, shareholders, competitors and business sector.

Consequently, large companies require elevated standards of disclosure, governance and financial reporting. In addition, employees of these fast-growing companies are usually compensated in part with stock or options and they deserve to have a framework to liquidate their holdings at fair prices. The US equity markets are the most liquid in the world and have high standards of price discovery and disclosure.

Many unicorns that have gone public since 2016 have been well past their peak periods of growth and their revenue is decelerating. With few exceptions, the IPO exits occurred because the limitless cash infusions reached the point of diminishing returns, not because the companies were on the verge of profitability.

The relatively slow rate at which unicorns have gone public is due to the large gap between their inflated paper valuations and what disciplined public investors are willing to pay after assessing prospects for future growth.

However, the slow-mo correction of these grossly mispriced companies has begun to accelerate, as demonstrated by the IPO down rounds of a number of unicorns, most recently Pinterest and Uber. 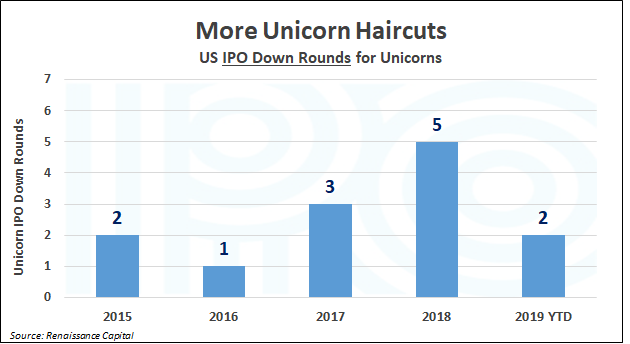 The self-destruction of WeWork is a bellwether for another problem: zombicorns. This small, but growing number of companies have lost access to additional capital, and are unwilling or unable to do IPOs. 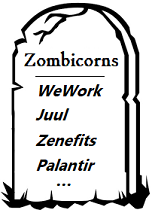 Next Up
The latest “cure” for overpriced unicorns and the living dead zombicorns: Direct Listings.

Become a Pro
Sign up for a free trial of IPO Pro.