How the JOBS Act Abuses Most Public Investors

From Good Intentions to Bad Results
The JOBS Act of 2012 started off with good intentions: to make it easier for emerging growth companies (EGC) to access the public markets and thus create jobs. In fact, it hurt public investors by depriving them of critical information, benefited the large privileged institutional investors by giving them more access to issuers, and created the current cohort of overripe unicorns.

How did Congress pass legislation that was so adverse to a key mission of the SEC, namely protecting the interests of investors and safeguarding free and fair markets? The 18-member IPO Task Force that formulated the major recommendations consisted of mostly individuals representing the sell-side: bankers, venture capitalists, potential issuers and their attorneys. Only two members were buy-side investors. 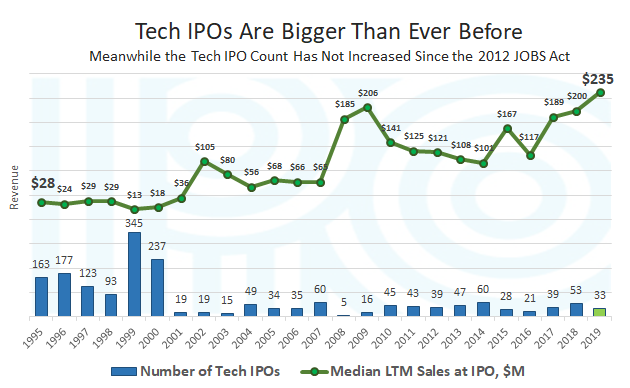 Limiting Information
One of the primary problems to address was the increased costs of doing an IPO for EGCs imposed by the Sarbanes-Oxley Act of 2002. Among the Task Force’s worst recommendations was to reduce the financial information provided in the prospectus to two years of audited results and selected financial information from three and five years, respectively. As a result, public investors are deprived of essential facts about the issuers.

It is impossible to identify trends in same store sales, cohort analysis or margins from only one or two data points. Any company that wants the privilege of being publicly traded has the responsibility to provide appropriate information prepared in accordance with GAAP accounting standards.

Inaccurately Defining “Emerging”
The JOBS Act ludicrously defined an EGC as any company with less than $1 billion in revenue. That’s 90% of the IPO market! A company with $100 million in revenue is hardly a “mom and pop” incapable of paying for audited financials. Many companies in the S&P Small Cap Index have revenues below $500 million and a number have revenues below $250 million.

Access for a Favored Few
Reasoning the some EGCs were reluctant to do IPOs due to the public filings requirement during the SEC review, EGCs (and now all companies) can file confidentially. While confidential filings bestow no advantages to any class of investors, the rule shortening the time from when the filing is made public to the beginning of the road show to 15 days hurt most investors.

Prior to the JOBS Act, investors had over a 100 days on average to review a filing; now it’s a mere 27 days from filing to pricing. Moreover, under the JOBS Act, certain investors (meaning large, favored ones) get to communicate with the issuer both before and after filing a registration statement. While “testing the waters” was well-intentioned, it is destructive to free and fair markets because it prevents the majority of public investors from receiving the same information given to a favored minority. 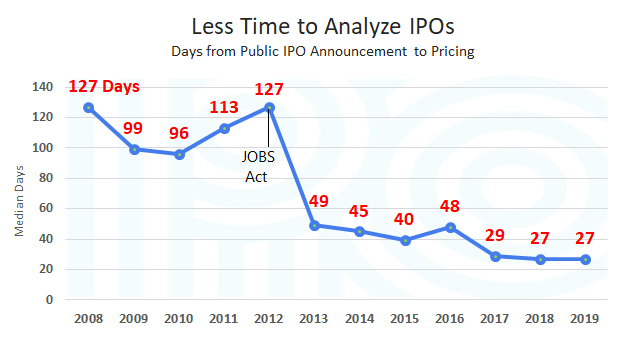 Next Up: The Creation of Monsters
The JOBS Act increased the number of investors allowed to a private company before it must go public to 2,000 from 500. Within a few short years, the number of private companies with multi-billion valuations swelled from a handful to hundreds, creating harmful distortions of capital markets.

Become a Pro
Sign up for a free trial of IPO Pro.