Amid a crumbling SPAC market, nearly 600 blank check companies are still looking for acquisition targets, with deadlines rapidly approaching. SPAC sponsors are highly motivated to find targets, and as competition heats up in domestic markets, they have increasingly turned abroad.

As some SPACs have discovered, due diligence can be harder when conducting transactions overseas.

SpringOwl Asset Management’s SPAC 26 Capital Acquisition (ADER) has found itself in the midst of a bizarre saga with pending merger Okada Manila, a Philippine casino resort it valued at $2.6 billion when the agreement was struck last October. In mid-June, weeks before SPAC shareholders were set to vote on the proposed merger, the company reported that the property had been seized by the company’s former Chairman and CEO, 79-year-old Japanese casino tycoon Kazuo Okada, along with former director Antonio “Tonyboy” Cojuangco and about 50 Filipino police officers and private security guards, who "illegally and violently entered and occupied OKADA Manila premises."

To read the rest of the article and for enhanced coverage of the SPAC market, sign up for a free trial of IPO Pro. 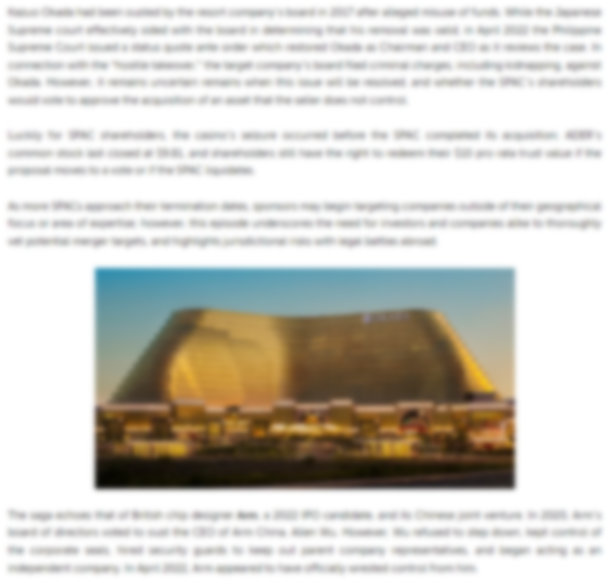