Beyond Meat vs. Impossible Foods vs. Real Beef: Who Wins?

In honor of the Beyond Meat IPO, the team at Renaissance Capital pitted the Beyond Burger against its fiercest rival, the Impossible Burger.

And the winner was… real beef.

Despite having mostly positive things to say about the two meat substitutes, analysts overwhelmingly preferred the taste of natural meat, with the exception of the office’s vegetarians and semi-vegetarian. Our team felt that when it comes to burgers, "nothing beats the real thing." The runner-up was the Impossible Burger; if given the choice between Beyond and Impossible, the choice was unanimous in picking Impossible.

Here are the results of our unscientific survey: 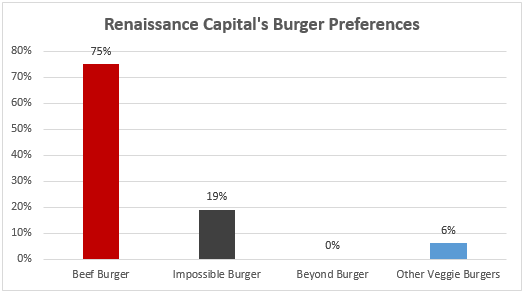 For more IPO commentary, sign up for a free trial of our premium platform, IPO Pro.

In spite of our preferences, Beyond Meat's initial trading has showed that plant-based meat is a hot space. Beyond Meat priced $5 above the original midpoint at $25, and then soared 163% to $65.75, the IPO market’s biggest first-day pop since 2015. It has the best first-day pop for a Consumer IPO in at least 20 years.

Both companies highlight that their burgers require drastically less land and water than beef, while generating fewer greenhouse gases, and causing no harm to animals. Beyond makes a health claim too, though some analysts were turned off by its relatively high calories and sodium.

While Impossible was the clear winner, most people were generally favorable toward Beyond. In addition, Beyond Meat is arguably more “natural” since it contains no genetically-modified organisms. Either way, the market appears large enough for both, with plant-based meats generating roughly $5 billion in revenue. In its S-1, Beyond sees a path to a $35 billion market opportunity.

The Beyond Burger
Founded and led by Ethan Brown and backed by Bill Gates, Kleiner Perkins, Obvious Ventures, and DNS Capital, Beyond Meat distributes its products to more than 17,000 grocers (e.g. Whole Foods, Kroger) and 12,000 restaurants (e.g. Bareburger, Carls Jr.). Its burgers are made through a proprietary process that weaves together peas, mung beans, sunflower seeds, rice, canola oil and coconut oil. The company expects to see sales growth of about 205% in the 1Q19, higher than 2018, and is now entering grilling season with a supply chain that can keep up with demand.

Here’s what our analysts said about the Beyond Burger:
“Better than your average veggie burger. I liked it.”
“Pretty good. But not like, 20x-forward-sales-good.”
“It had an earthy taste. Not terrible. I could see certain people liking it.”
“Not bad, but not great. I can taste the sodium.”

The Impossible Burger
Founded and led by Patrick Brown and backed by Bill Gates, GV, Khosla Ventures, UBS, Viking Global, Temasek, and Sailing Capital, Impossible Foods has raised roughly $400 million privately. While Beyond Meat’s public reception makes an Impossible IPO more likely, a March 2019 SEC filing D shows that Impossible is content to remain private for now. Made from potato protein, soy protein, coconut oil, and sunflower oil, the Impossible Burger is distributed at national restaurant chains like Burger King and White Castle, and this year it is rolling out an expansion into groceries. Like Beyond, Impossible Foods has had trouble keeping up with demand.

Here’s what the team had to say about the Impossible:
“Looked and tasted more like a real burger.”
“I might like Impossible better, but I’m also more suspicious of it.”
“I prefer natural foods but this is a good alternative for meat eaters.”