Dropbox (DBX) plans to raise as much as $720 million in the largest IPO from a US tech company since Snap (SNAP) in the 1Q17. The company raised its price range this week in a sign of high demand, and is now scheduled to begin trading on the Nasdaq on Friday.

Valued at $10 billion in January 2014, Dropbox's offering will set the tone for other tech IPOs with high valuations and heavy losses. At the high end of the revised $18 to $20 range, it would command a fully diluted market value of $9.0 billion and an enterprise value of $8.4 billion.

Fellow cloud storage provider Box (BOX), which IPO'd in early 2015, is a natural comp for evaluating Dropbox's valuation. Both are leaders in Gartner's Magic Quadrant for Content Collaboration Platforms.

At $20, Dropbox is being pitched at 7.6x trailing sales, a premium to Box's 5.9x. That's not surprising given Dropbox's larger scale, faster growth, and greater profitability. However, we note that Dropbox's consumer-based model differs from enterprise-focused Box. Unlike Box, Dropbox cites high-growth collaboration software provider Atlassian as a competitor, which also has a low-touch sales model (and a much higher multiple at 17x LTM sales). 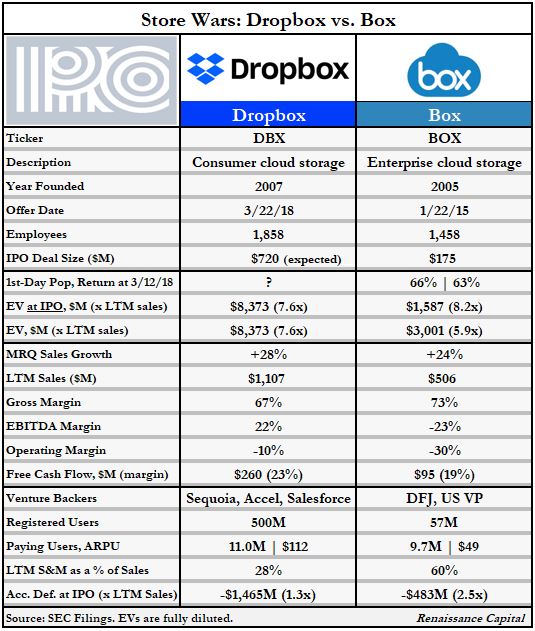 Get dashboards, updates, screening, tracking and enhanced profiles with our premium platform, IPO Pro.
And stay on top of upcoming IPOs like Dropbox and Spotify by joining our email list.

Dropbox's key selling points
Dropbox has $1.1 billion in annual sales with 28% MRQ growth. That's a rare opportunity: in the past three years, only five tech IPOs (5%) had over $1 billion in LTM sales, and of those, only Square (SQ) had 20%+ growth. Gross margin has doubled over the past two years to 67% in 2017, and should continue to rise. Its freemium model improves the bottom line; 90% of revenue is generated from self-serve channels, and sales and marketing expenses as a percent of revenue are less than half the level of Box. That has led to an attractive free cash flow conversion, pulling in $260 million in 2017. High-growth tech IPOs have outperformed; since 2015, the 55 software IPOs have averaged a first-day pop of 26%, and a total return of 110%. And in a vote of confidence, shareholder and partner Salesforce is investing $100 million in a concurrent private placement at the IPO price.

How Dropbox could eventually drop
Dropbox's main competition includes Google, Amazon, Apple and Microsoft. That is a daunting group with extensive resources and near-ubiquitous consumer presence through hardware and online accounts. Insiders are selling 25% of the IPO, including the founder and CEO. While improving, operating losses are still massive at -$114 million in 2017, along with a titanic $1.5 billion accumulated deficit. As Blue Apron (APRN) and Snap showed last year, highly-valued, highly-unprofitable companies can crash through the floor of peer multiples. 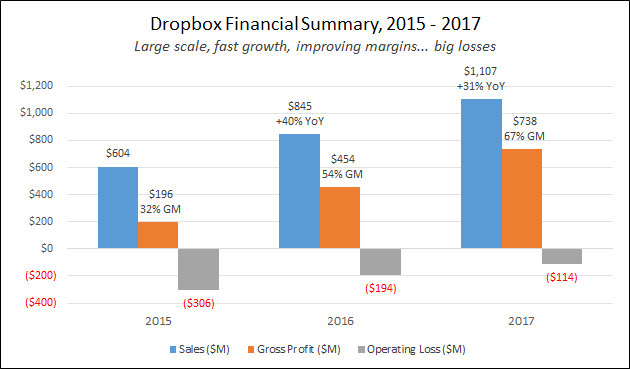