Tech IPOs see a hard road in 2016: Higher volatility, lower returns, contracting multiples
2015 saw the lowest tech IPO activity since 2009, and 2016 is not looking much better. The VIX Volatility Index rose again this week - it has remained above 20 almost every day this year. Consumer-focused tech and internet names like Twitter (TWTR; -32% year-to-date), GoPro (GPRO; -45%) and Fitbit (FIT; -47%) have had well-documented declines. On Friday, weak earnings and lower guidance caused Tableau Software (DATA) to sink 50% while LinkedIn fell 44% and New Relic (NEWR) declined 22%. 4Q15 IPO Match Group (MTCH) missed its first earnings report as a public company and fell 26% this week. For other high-growth, high-loss tech names, investors ditched their shares before the upcoming earnings announcement, including Hortonworks (HDP; -20% on Friday; -63% YTD), Rapid7 (RPD-14%; -27%) and to a lesser extent Shopify (SHOP; -7%, -15%). Even Atlassian (TEAM), which blew out earnings and raised guidance, fell 16% on Friday, and now trades below its offer price. High-profile 4Q15 'unicorns' Pure Storage (PSTG; -28% from IPO) and Square (SQ; -4%) are yet more casualties of the sell-off. The tech IPOs in the 4Q15 faced intense valuation pushback, but now only three of the nine trade above their offer price, and only one is up more than 4% (Adesto Technologies (IOTS), which had to slash its valuation). The massive backlog of pre-IPO tech companies and their VCs can only watch in horror and conclude: These are tough times for tech. 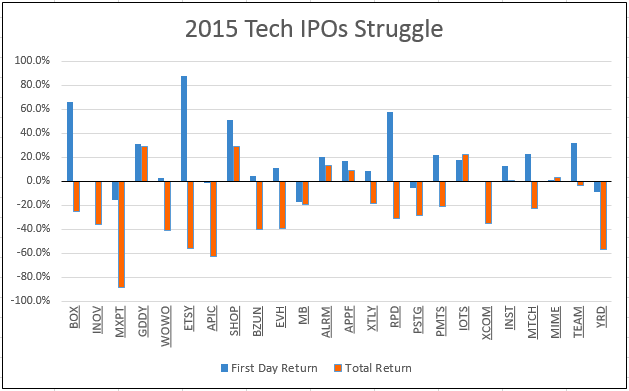 Upcoming tech IPOs
With the exception of quasi-tech company Tabula Rasa Healthcare (TRHC), the tech sector has not seen a single new filing this year. Notable tech filings from December - Nutanix (NTNX), Acacia Communications (ACIA) and SecureWorks (SCWX) - have waited on the sidelines for good reason. Showing another possible route, Private Company Watchlist member Jasper announced that it would be acquired by Cisco for $1.4 billion - roughly the same valuation it achieved in April 2014.

Renaissance Capital's Pre-IPO Research is the gold standard for institutional investors.
Follow us on Twitter (@IPOtweet) for IPO news as it happens and register for our updates on the IPO market.