Pop culture figurine maker Funko (FNKO) fell 41% on Thursday to close at $7.07. That gave it the worst first-day return for an IPO in 17 years, since June 2000 financial services IPO eChapman.com (-43%). Funko priced a downsized IPO at $12 per share, below its range of $14-$16, to raise $125 million at a market cap of $586 million. Investors were likely concerned over slowing organic sales growth and contracting margins in a hit-driven industry.

Funko's flop is particularly unusual for an IPO led by Goldman Sachs. Goldman-led deals over the past five years average a stellar first-day pop of 25%. Fewer than one-in-five finish the first day below issue. 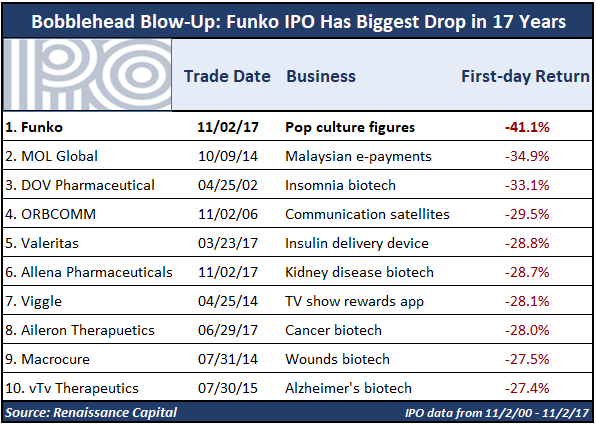 The analysts at Renaissance Capital are excited to introduce IPO Pro later this month. And check out our newly-released IPO Masterclass: The first video in the series is now available.